Announcement of a New Partnership

Previous Next
Announcement of a New Partnership Reta Wars is delighted to announce its strategic partnership with Avocado DAO, a prominent Web3 Gaming Guild. The long-term goal is to shape a new future for blockchain through GameFi and SocialFi initiatives.

Reta Wars’ innovative GameFi system, officially launched on October 3, 2022, offering opportunities and inspiration to many users across Asia, including Japan and Korea. This incredible partnership news means that Reta Wars can offer players and scholars a wider range of opportunities and help bridge them into the Metaverse.

What is Reta Wars?

As the title suggests Reta Wars is a war-themed game, but it doesn’t just mean Battle. As evidence in the real world, “Battle” is just one part of war which also involves economic influences and political events. Reta Wars is a War-to-Earn game that encompasses these elements. Within the endless wars of Nate and Gaia, the key forces, players can receive economic returns in a variety of ways.

Players can hire NFT heroes and strategically place them in buildings in their territory to produce resources. The hero has various skills and stats, and there are various buildings in the player’s territory, such as barracks, secret bases, mines, lumber mills and farms. When a player deploys an NFT hero in a building, heroes produce resources according to their capabilities. Players must now carefully examine how to use this resource.

In general, players can obtain the in-game token, GRT, by selling resources they harvest, but they can also supply resources to their forces and receive GRT as war rewards. On the other hand, players who have achieved high results in war or who have supplied a lot of resources for power can earn the governance token, RETA, on the ranking table.

Reta Wars is full of amazing revenue opportunities, but it’s impossible to predict all the results like the Excel Calculator. Because the tide of war and the planet winning or losing always affect fluctuations in resource prices, players will always be required to make strategic and rational choices. Sometimes players need to communicate with other players to form groups for their own higher returns. This is because the battle strategies that greatly affect the victory or defeat of the war and the profit of the game are all determined by the votes of the players. Yes, it’s like a strategy game where two giant DAOs compete for their own benefit, rewards and glory!

Reta Wars has designed a special tokenomics for a sustainable Game-Fi ecosystem. Unlike conventional dual tokens, which are merely implemented to avoid inflation, this system maintains value through mutual interaction. It means that players make various play plans according to their budget and purpose. Some people will sell resources to get GRT, and others will buy resources to get more RETA. This is an entirely new approach to the sustainability of the game’s ecosystem, in the same way as cross-border trade in the real economy. Reta Wars offers a solution to inflation with a new Game-Fi system that has not been explored before, and it will now be verified by various gamers around the world. Avocado DAO also reviewed the long-term potential of the new Game-Fi system by playing Reta Wars, and decided to enter into partnership. With innovative tokenomics and deep strategy, the game offers a new perspective on the sustainability of Game-Fi. Most importantly, DAO’s solidarity plays a significant role in determining team strategies by voting on how to tackle the war and win more revenue. It will eventually encourage more exciting team play and offer new inspiration to Avocado DAO and scholars.

Avocado DAO is a Web3 gaming guild that provides rewarding experiences for its scholars and facilitates entry to GameFi to empower more users. 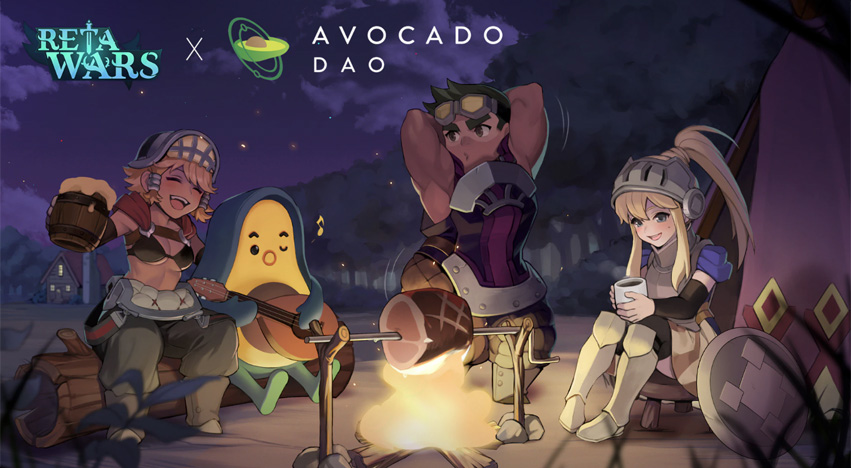