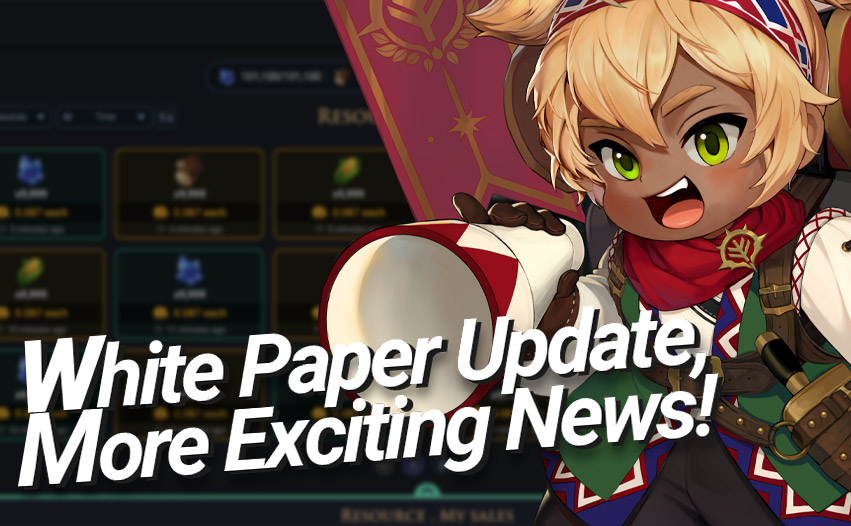 It is very significant that we have successfully completed the beta test. Because it proves that even in this chaotic market, we are creating a clear product by our roadmap. In fact, we work every day to prove Reta Wars to our commanders with ‘obvious results.’ This outcome will not end with one of the simple outcomes of the market. Reta Wars will provide you with a new experience never seen in any other game, which will prove to be of unquestionable quality.

Today, we introduce our updated new white paper 1.5.2. This contains a lot of news that was not previously known. Through this white paper, you will learn more about our project and want to join us on our grand journey.

Commanders can check white paper on the same URL as before, and they will also be able to check it on our official channel. If you are curious about our new white paper, check it out now!!

Reviewing the white paper is very important, but not everyone will necessarily remember it. For those commanders who don’t have time to review the white paper thoroughly, we will introduce some special points here today.

A lot of the description has been updated across the board, but one of the things that commanders should pay the most attention to is our tokenomics. This is also the basis of our confidence in Reta Wars.

We have added a detailed explanation of how RETA is partitioned and how it is distributed in our new white paper. And you will also find that the RETA that will be in circulation over the next 5 years in Reta Wars is only 24% of the total issuance. The most notable of these are the system’s core: the Rewards pool and the Company assigned pool. 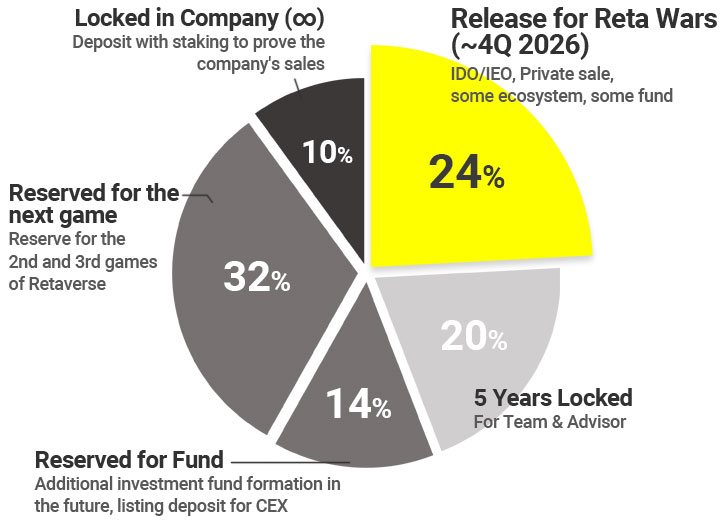 Release of only about 24% over 5 years

Reta Wars is our landmark first game, but RETA, the governance token, will not be used just for Reta Wars. RETA is the governance token and common currency of ‘Retaverse’, a comprehensive game ecosystem of RETA that we will finally complete, so we plan to store a large percentage of RETA for the next game to be developed in the future. Therefore, RETA that will be circulated on the market for the purpose of Reta Wars over the next 5 years is equivalent to about 24% of the total issuance.

30% of Marketing: The use of the marketing pool is limited, and it is not used exclusively for Reta Wars. This will be distributed for use in other games that will be added to Retaverse in the future.

15% of Reward Pool: The reward pool is shared by all games in Retaverse and is rotated by our game economy policy. 5.25 million RETA (15% of reward pool) used in Reta Wars for the first 5 years are expected, and a portion of the fees incurred in the game will be credited back here.

30% of Operating Fund: The operating funds are divided for various purposes. It is configured for reserves for CEX listing, or to be sold to investors. The circulating supply and locking plan of this pool is flexible and is subject to change depending on investment and listing.

More about the reward pool:

Yes, that’s right. RETA’s supply is quite limitedAt Reta Wars, we plan to use only 15% of the reward pool over the next 5 years. If you’ve been in beta testing, you’re probably wondering how big the rank rewards are.

“How can you explain that the reward pool is limited, even though the 1st overall weekly ranking has the potential to receive a whopping 20,000 RETAs or more?”

And that’s not all. As we have already stated, do not forget that we have decided to share the corporate profits generated in this ecosystem with our players. Half of the marketplace fees will go to this rewards pool and be returned to players. The fact that we truly share our team’s interests with our players is one of the driving forces behind maintaining a substantial reward and ecosystem.

More about the Company assigned:

When half of the marketplace transaction fees go to the rewards pool, the other half will go to this pool. This is usually the company’s revenue, but we know that many players despair when the fees their team earns are dumped into the market in bulk. We eventually found another way. We will not sell the RETA allocated to this pool, we will stake it permanently as long as the ecosystem lasts. We plan to deposit the ‘Company assigned’ into Reta Staking, which will be revealed along with the game’s launch, and run the team with staking rewards under the same rules as players.

Commanders can now check the circulation of currency in the Reta Wars’ economic system. Some people may find this structure complex. However, we think this is a very natural system to build an ecosystem with excellent vitality.

As Commanders know, the developers of the Reta Team have been designing economic systems for countless games for a long time. We’ve already done a lot of research on the inflation caused by a simple, repeatable reward system, and we’re working to make Reta Wars a completely new and complete system.

This is our first modeling asset, unveiled for the first time today. And this has very important implications. This will be one of the most straightforward pieces of evidence that we are meeting our long-term roadmap and running towards our ultimate goal.

One of the team’s ultimate goals for Reta Wars is a perfect implementation of Simulator 2.0. The team developed the 1.0 and 2.0 models simultaneously from scratch to secure a development period for this. Simulator 2.0 is a full-3D battle simulation using the Unreal 4 engine. In this phase, the battle modeling of the player’s own NFT will be added, and the heroes will be equipped with weapons through additional updates.

This will come with additional updates after the Reta Wars 1.0 game is officially launched, and it will be the complete Reta Wars form we want. 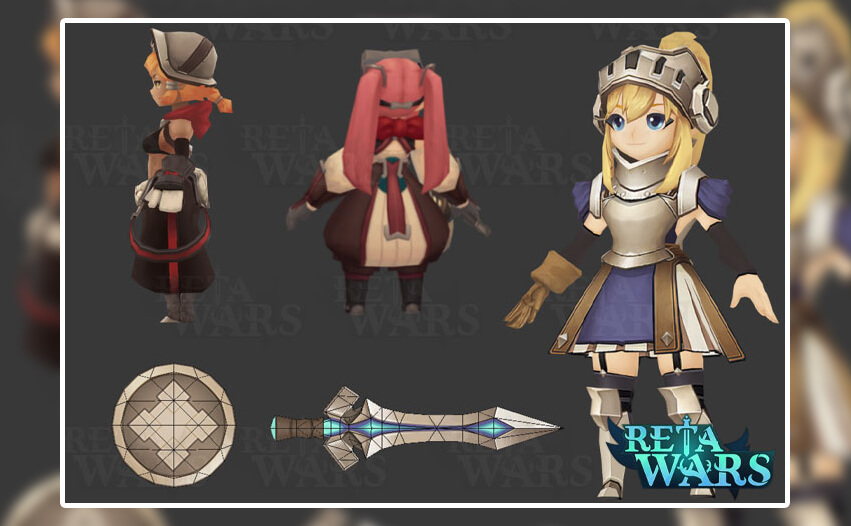 You may have noticed from this announcement that RETA issuance is now very limited. Most of the RETA issuance is reserved for not only Reta Wars but other new games to be added to the ecosystemAlso, we can see that the heroes are being made into attractive 3D models.

Our tokenomics and development direction, all of these are for our ultimate long-term goal, the Realital Metaverse, the ‘Retaverse’. A second and third game will be added to this metaverse dealing with the RETA universe, and Reta Wars is the first. And the NFT owned by the commander will also be appreciated in other games in our Retaverse.

As you may already know, we’ve had some roadmap changes recently. This is because we had developed the content to be set in the third quarter in advance, and as a result, the beta test was delayed. In addition to updating these changes in our new white paper, we’ve added some plans for a more engaging Reta Wars.

The updated white paper introduced today speaks to our long-term, clear future, and we are also confident in the future of RETA. But we all know that what’s important to us right now is to start with the goal right in front of us.

Reta Wars finished its whitelisted beta test on Monday and is currently gathering feedback and updating its improvements. We’ll keep you posted on what we’re doing and how we’re improving it through our official channel.

And at the end of that work, an open beta test in which anyone who owns at least one NFT can freely join will begin. Open beta testing supports resource and soul trading. Please remember that resource trading is a crucial element of the Play-to-Earn model, so it must be beta tested to increase safety. 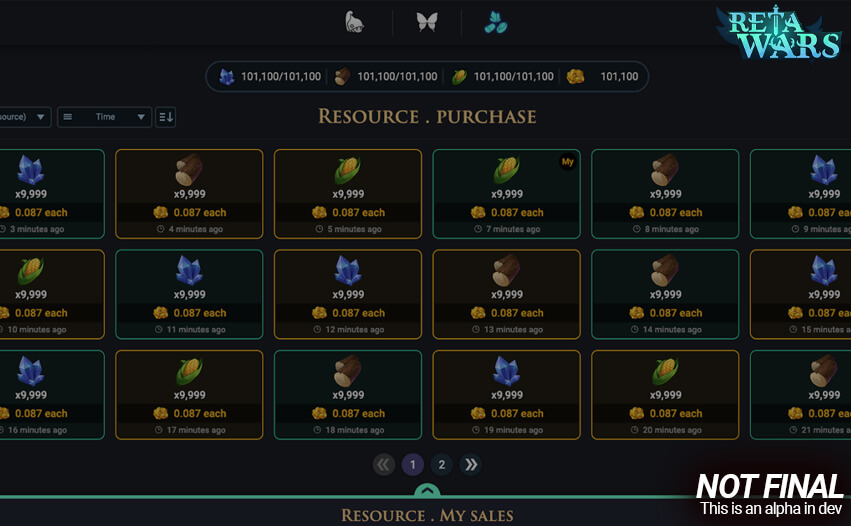 The open beta test is planned to be held in July, and we will reveal the detailed schedule as an additional announcement. We expect as many commanders as possible to join this open beta test. At this time, players will be rewarded with clearer airdrop rewards in proportion to the GRT earned on the testnet.

Then stay tuned for our follow-up announcement!